Last night, as I was falling asleep a memory returned. My mind was going over things I’d been thinking about for a couple of days now as my mind does right before I drop off. Thoughts like trying to remember my first trip to Disneyland, and any subsequent visits during my childhood. Earlier this month I even asked each of my offspring about their memories of their first times at Disneyland (more on that in another post). And as I started to drift into sleep a very distinct memory popped into my head.

Tom Sawyer Island (until now I thought it was Tom Sawyer’s Island, but the photo of the brochure below cleared that up), when I was maybe 11 or 12. In 1975 my dad married a woman who had a couple of sons. I have a brother of my own. That gave my dad and his new wife four children. Have you ever taken four children to Disneyland for the day? I have. It’s pricey. 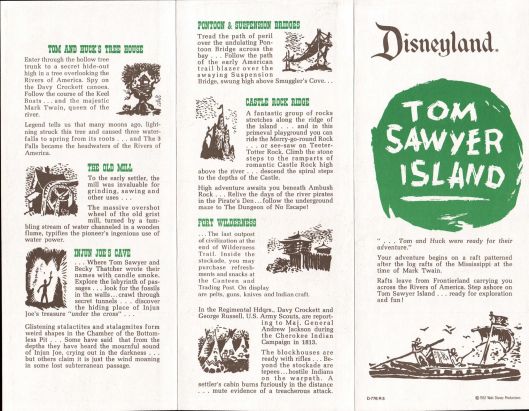 Anyway, the memory is of me and my three brothers on Tom Sawyer Island. I remember going through Injun Joe’s Cave, bouncing across the barrel bridge, climbing up and down the inside and outside of Castle Rick, walking and running around the entire island pretending we were on our very own island. And my favorite part of that adventure, besides cruising over to the island on the raft, was Fort Wilderness (see a link below for visual reference and history).

Fort Wilderness was practically a working fort with turrets and pretend guns and telescopes for spotting the enemy. There were diorama rooms of life back in the 1800s in a Fort. It was the coolest place I’d ever been, playing on Tom Sawyer Island. At home, my brother’s and I played a lot of pretend – they were all younger than me by a little – but we never had this much ‘playground’ to fuel the imagination.

That’s what I love the most about Disneyland – the inspiration and the stirring of the imagination. Imagining life in a small town while walking down Main Street, racing cars in Autopia like an adult, shrinking to the size of an atom, and taking a rocket to Mars or a shuttle out into space with a droid. Imagining. Walt did such a great job of bringing out the kid in a kid, and reminding adults of what it was like to have an imagination. I am grateful to him for creating a park where an adult can be a kid.

I also recall (I was around 11 tears old, so keep that in mind) that my dad was not too happy that he’d brought us to Disneyland (at some expense) and all we wanted to do was play on that island until the Park closed. I think we played on that island for two hours and left reluctantly to visit the other exciting attractions Walt and the Imagineers had come up with for our enjoyment and further inspiration.

I also wish I had photos from this trip and others like it from my youth. Alas, I do not. I will make sure I always take photos of my visits, of the surrounding landscape that exists until it does not, for history – mine and yours.

That’s all for now. Until later, remember to look for the magic!

Posts of the Past

A Memoir of the Road Unknown

One Chance to See the World

Tales from the mouth of a wolf

I am more of a story teller than anything and, I will throw in and sprinkle some motivational personal experiences.... & Every Little Thing.

If you want to be a hero well just follow me

Growing older is inevitable. Growing up is optional.

Listen to your inner self..it has all the answers..

Ludwig's space with some fun, some tips, some insights, some computer skills for us older folks

The Art and Craft of Blogging